Ever since I can remember, I’ve been a meddler of words. I like writing about fear and emotion – the cause and effect of crime – what makes a character do something.

Working as a housing officer for eight years gave me the background to create a fictional estate full of good and bad characters, The Estate Series.

But I’m a romantic at heart and have always enjoyed writing about characters that aren't necessarily involved in the darker side of life.

Coffee, cakes and friends are three of my favourite things, hence writing under the name of Marcie Steele too.

As you're probably aware, I write The Somerley Series, set in the market town of Somerley. There are three books in that series but I've also started a spin-off series, because I wanted to write about six characters who live in the same street.

They’re all female, friends and neighbours, and every book will feature a different character's main story while catching up with the rest of the cast.

Each woman is coming up to a big birthday, from sweet sixteen to eighty years young. Doing it this way also means that the books can be read in whichever order you like.

I suppose it's a bit like Coronation Street in a book - light-hearted moments but a few harder hitting stories too. For the main, it is happy go lucky.

The new series started with The Man Across the Street, with Hannah who lives at number 34, Hope Street. The next one, Coming Home to Hope Street is out on September 18 and features Hannah's sister, Livvy. The cover will be revealed at the beginning of next month.

So as Marcie, I write stories, full of warm people, loving relationships, and charming friends – well, most of the time. I write about people who fall in and out of love, have good friends to share their happy and sad moments with, and live in communities with great spirit.

Down-to-earth stories, about day-to-day life. I lovingly call them chick-grit.

Over the next few weeks, I will add a few more posts about Marcie and some short stories.

Have you read Marcie Steele? Did you like them? Did you see 'Mel' in them? I'd love to know what you thought. 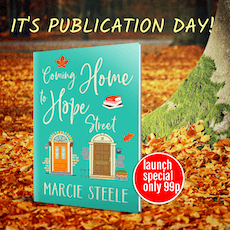