How do I write? (2012)
I am a plotter. I start with an idea, a beginning, a middle and an end. I write biographies to get to know the main characters. I write a beginning, middle and end for all their stories. I put them all together into roughly twenty chapters. Then, once I have my draft plan in place, I write straight onto my laptop.

Those twenty chapters usually turn into between forty and fifty over the course of the first draft as I add in more plots and twists as they present themselves to me. There is nothing better than a new twist that develops just through writing that first draft.

How do I write? (2019)
I am still a plotter and I still start with an idea, a beginning, a middle and an end. However, I don’t write character biographies now. Instead, I tend to trust my intuition and let the characters reveal themselves while I’m writing about them. It can make for some great twists and turns.

If I’m writing women’s fiction it will be two or three scenes a chapter, so that length above is indeed around forty chapters overall. But I tend to have at least fifty rough chapter ideas for my crime now and I end up with double that number by the time I’ve finished  – around eighty. This I feel works better with my kind of crime novels.

I’ve still to find anything better than a new twist that develops through writing that first draft. I also tend to have numerous twists appear as I do three drafts now, rather than one long one.

Where do I write? (2012)
Early mornings, I type on a laptop, usually sitting on the settee – I find it’s my most productive time so I enjoy a coffee or two while I’m at it. Later, I use my office. When I’m coming near to the end of a draft or a rewrite and I need it finishing or out of my head, in the evenings, I’m back to the laptop on the settee again, although sometimes it’s in the kitchen as I drive my husband mad by tippy-tapping next to him when I go into the zone. 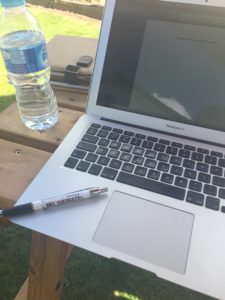 Where do I write? (2019)
I’m still an early morning writer but I’ve moved mostly to my office now. I tend to either go through work from the day before while I have my coffee, refreshing my memory with what is next to do, or else I’ll be reading a business book, or watching a YouTube video for something I need to learn. Due to having problems with one of my hips, I now exercise every weekday morning so from 7.30 I’ll be on my cross trainer for 40 mins. After breakfast, that’s when I sit down, switch everything off and hone in for a few hours of writing or editing.

Nowadays, I tend to work on my writing during the days only. I try to switch off in the evenings, just like I did when I worked full-time for someone else. It gives me a breather and is much better for my sanity – although I do still find myself on the kitchen table every now and then.

Why do I write? (2012)
I just have to. I’ve been writing in some form or other since I was a teenager. I’ve read every how-to book imaginable over the years – and in every kind of genre and discipline to try to find my voice. It wasn’t until 2004 that I started to take it seriously and, even now, I still learn something new with every draft I complete. I hope to never stop learning.

Unless I am in ‘finish first draft or re-write mode’ where I have been known to write 46k in 18 days when I have a full day to write (the other 46k took me a lot longer!), I find I do everything but write. It seems it’s the same for most writers – we all talk about procrastination. So I have to write for long periods and quickly. It works for me but it might not work for everyone.

When I start a book, it’s like pulling teeth but the more I write, the longer the writing sessions become. When I was working full-time, I’d start off with a target of 3,500 words a week, 500 words per day (often I didn’t do any writing at first so the target would build up and up and UP). Then I’d move to 1000 words per day, then 1500 and so on. Now, having the luxury of being able to write full-time, I aim for 3000 words a day. You’ll often find that I go off the radar, my blog posts become fewer, my online presence a little sketchy as writing comes first. I mark my completed word total on a wall calendar for encouragement. Once the draft takes off, I find it hard to stop. But the first 100 pages for me are the killer. Can I really do it again?

When do I write? (2019)
I have a totally different way of writing the first draft now (which I’ll save for another day) so my aim is to get 50,000 words down in one month, writing the whole story quickly and then going back to fill in the gaps on the second draft. I usually aim for 2000 words a day. At this stage, I can usually write those 2000 words in a morning, so I catch up on other things in the afternoons. It’s no longer like pulling teeth all the time because I am more disciplined and set myself targets that I mostly adhere to.

When I start the second and consecutive drafts, or when I work on structural edits, that’s when I go to ground as I find I can only concentrate on one project at a time when I have a head full of the story. I also tend to look at drafts over a smaller timescale and layer with each consecutive draft – plot, description, emotion etc.

I still mark my completed word total on a wall calendar for encouragement.  And that ‘can I really do it again’ question from 2012 is often ‘do I really have to do it all again?’ once I’ve finished and know I have another book to start.